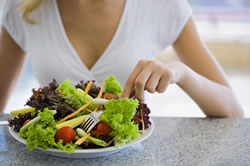 Diabetes is a condition that develops slowly overtime.  It can be the result of decades of a diet high in sugar.  There are no symptoms in the early stages, and even worse, there are no symptoms to warn you that you are moving towards a diabetic condition.  Most people find out "suddenly" they have diabetes after a blood test.  If the diabetic factors in the blood were being monitored overtime, a trend of increasing blood sugar over the decades would alert the doctor that you were on your way to developing diabetes.  The doctor could have warned you to change you lifestyle and you may not have developed it.

Dr. John Phelts, too often sees patients in his New York office, who were told that they have diabetes.  However, no one warned them before that they were at risk before developing the disease.  They come to Dr. Phelts looking for an alternative to the traditional methods of treating diabetes, like pharmaceutical drugs.  Before diabetes can be manged successfully, you first need to know what factors increase your risk for diabetes.   If any of these risk factors apply to you, then you must know what your options are to change it.  Diabetes can be controlled or reversed with lifestyle changes.  Often the preventative methods for managing diabetes are the same as the cure.  Lets look at at some factors that can contribute towards diabetes risk.

Medications
Many people are not aware that cholesterol lowering drugs (statins) actually raise glucose levels.  Statin drugs can increase fasting blood glucose by 7 mg/dL in individuals without diabetes.  In diabetics, they can raise glucose by 39 mg/dL.  Wow, that is a very significant increase in sugar.  Statin drugs actually doubles your risk of developing diabetes.  Statins work by blocking your liver from converting starch into cholesterol.  This creates an excess of starch (sugar), which cause glucose and insulin levels to rise.  Studies show that individuals who used statin drugs longer than two years are more than three times as likely to get the disease.

In 2014, the American Diabetes Association recommended that patients with diabetes be put on a statin drugs to lower the risk of heart disease.  Were you diabetic before going on a stating drug?  If the answer is no, then there is a chance that it is contributing toward your diabetic state.  If the answer is yes, then the statin drug may be hindering your ability to be free of diabetes.  There are many ways natural ways to to reduce cholesterol, like the adopting the right type of diet and exercise routine.

Beverages
The easiest way to cut down your daily intake of sugar is to cut down on sweet drinks.  Research studies have shown that soda, fruit juice, sweetened tea, and coffee drinks with sugar added can increase your risk of developing diabetes, inflammation, tooth decay, and cancer.   You may be surprised to see fruit juice in that list, but fruit juice does increase your risk.  Did you know that a 12-ounce soda contains 35 to 45 grams of sugar. 12 ounces of fruit juice has 30 grams- not much different from soda.T

Food Additives
- MSG (mono-sodium glutamate) Increases blood sugar, which increases the risk of diabetes.
- Aspartame causes rapid release of the hormones insulin and leptin.  These hormones that tell the brain when you are satisfied, regulate your metabolism and fat storage.  Leptin is responsible for insulin signaling and determines whether or not you become insulin resistant.

Get Tested
It is important to test you Glucose and Hemoglobin A1C  regularly.  If Dr. Phelts sees the trends of these numbers going up then he may recommend some lifestyle changes.  Significant improvements can be seen in just a few weeks!  It is also advisable to do a urinalysis every 6 months if you are over 30.  A comprehensive blood test should be done initially and repeated once a year to monitor other metabolic factors in the blood to include kidney function, liver function, digestion and other areas that may need to improved and or optimized for your health overall.

Deficiencies can be corrected easily with proper supplementation.  Diabetics should be on common vitamins such as Vitamin C, Fish Oil, Magnesium, and Vitamin E.  Based on the testing results other nutrients like Vanadium and Chromium Picolinate may be advised.  Do you believe that you have been eating a healthy diet and exercising, but not seeing much change in your Hemoglobin A1C and Glucose?  Then get tested and get on a plan tailored to exactly what you need.  Give us a call, 212-286-2012 to see if we may be able to help you.